​Finding delicious instant coffee has never been an easy task. Compared to that fresh, aromatic morning cup of fair trade Columbian beans, the instant substitute is hard to sell. Often overwhelmed by harsh and bitter flavors, many customers only rely on instant caffeine when the good stuff is gone.

Well, that has begun to change. There has been a noticeable peak in demand for instant coffee, and as a result, some delicious alternatives have begun to take caffeine lovers by surprise. To make things a little easier for you, we have compiled a list of the 10 most delicious instant coffee brands and flavors.

The Best Instant Coffee Products on the Market

This brand blew its competition out of the water. Based out of Lancaster, Pennsylvania, this small company carefully and ethically sources its beans to ensure it gets some of the best on the market. This isn’t all that makes it number one, however. What makes Swift Cup taste so good is its roasting process, which ensures that the fruit still holds a great deal of its nutty, natural flavor by avoiding the common mistake of roasting the beans for far too long.

Once roasted, they then freeze dry the beans, dehydrating them, and packaging them. It’s a traditional instant coffee in that you only need to add hot water to get a delicious cup of joe.

Swift Cup ranked number one in numerous taste tests. It didn’t have any of the harsh, bitter flavors many have begun to expect with traditional instant. A majority of the customer reviews stated that it tasted just like having a normal cup of coffee and that, if forced to guess which was which, they couldn’t distinguish between the two. Swift Cup also boasts a wide variety of flavors, meaning you can get a bold, dark instant coffee, or a light and nutty option to slowly ease into your day.

Equator ranked closely behind Swift cup for its pure, unadulterated coffee taste.  Equator Coffee and Tea is a famous company known for its environmental responsibility. Started by two women with a love for coffee brewing in their garage, Equator coffee has grown into a nationally recognized brand that actively promotes coffee sustainability and environmental responsibility.

Instant coffee is a new thing for this company. Despite this, their instant coffee dominated the charts in terms of taste.  It is a single origin instant coffee and you can be sure that the beans are from a farm that grows sustainably. It was reported to have all of the same robust flavors of your traditional drip coffee without any harsh bitterness finishing off your palate.

Each serving of Equator’s instant coffee comes in a plastic tube. You can order them individually or in a set of six varying flavors. You end up paying a little more for this versus the less sustainable options, but the taste and knowledge that you are sourcing beans from good farmers is enough to make up for the increase in price.

This company started off on Kickstarter, led by a guy who stumbled from coffee opportunity to opportunity, until finally deciding to start his own venture. It is a new company, like both Equator and Swift Cup. It also came in close to the top spot, with people raving about how wonderfully similar these instant packets were to home-brewed coffee.

Voila’s methods involve simply brewing large batches of carefully roasted coffee, freeze drying this coffee, and packaging this to send to customers. He also mentions that there might be some secret steps included in the process, but never divulges what they might be.

What you are drinking, then, is an unadulterated cup of coffee that is just preserved for consumption at another time. The packages also come in what looks like a vintage cigarette box, so the product is delicious and attractive.

You also get variety and affordability with Voila. It is slightly cheaper than Equator, and you can trust that the taste is authentic. Kent Sheridan is a self-proclaimed coffee enthusiast after all, so it seems he puts the best into his product.

This seemed the most reputable brand for those just beginning their venture into instant coffee. Mount Hagen has been around longer than of the aforementioned instant brands, and is slightly cheaper than its tastier counterparts. It is a fair trade, organic company, which means you’ll have extra peace of mind when you are choosing to buy this product.

It didn’t have a superbly amazing taste, and new drinkers of instant coffee would think this a normal brew. It did lack any acidity and had very little bitterness, but it was lacking in the substantial, robust taste that companies like Voila, Equator and Swift Cup have achieved. It also only has one flavor, so you are not given the variety of options that other companies have provided.

However, for being an ethical company and at its price, Mount Hagen is a very delicious option and has been a favorite choice of coffee enthusiasts for many years. 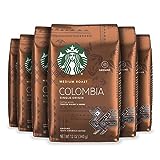 Starbucks, despite being a well-known coffee vendor, has taken the back seat in terms of flavor, as the coffee market grows more and more saturated with new, innovative players. The company simply became too large, and as a result, lost a great deal of its quality in the process.

In terms of instant coffee, however, it hasn’t completely dropped out of the game. Like the plethora of flavors you can find at the store, their instant coffee comes in an abundance of varying roasts. The top-ranking flavor seemed, nearly universally, to be its Columbia instant.

This instant was reported to have slight acidity, but overall it had a wonderful flavor that delighted many coffee newbies and connoisseurs. The reviews varied a little wildly, however, and led us to the conclusion that Starbucks is slightly unreliable in its packaging. While a great deal of the reviews applauded this as their go-to instant, roughly 20 percent of the consumers had experienced a terrible batch. Starbucks Columbia would have ranked slightly higher on the list due to how ubiquitous it has become, but the reported inconsistency of its quality knocked it down a few spots. 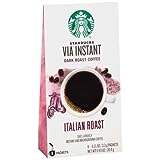 Starbucks Italian Roast seemed another popular option for consumers. In general, this large company has managed to find their way around the horrid taste traditional instant coffee is known for. This is noticeable in both the Italian and Columbian Roast due to a little secret addition to their instant, which is finely ground coffee grounds in the instant blend, adding a more genuine, fresh taste to the brew.

The Italian seemed popular for those who traditionally enjoy a darker roast, which of course implies more bitter flavors. Despite this, customers generally enjoyed this brew. Although not all of Starbucks instant coffee options have become as popular as the Columbian or Italian, these two seem to hit the nail on the head and are easily accessible and affordable options.

Like its Columbian counterpart, both connoisseurs on the go and coffee newbies enjoyed this instant. It seemed that more complained about price of this roast than they did for the Columbian, indicating that the former seemed more worth the investment than the latter. 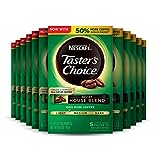 Now we are getting to the point where there is an expected taste of harshness and bitterness to these cups of coffee. Nescafe Taster’s choice is one of the more common, lower-grade instant coffees that are still quoted to be quite delicious. Nescafe has a variety of flavors to choose from, but overall, its Taster’s Choice line was voted number one.

It doesn’t have that overwhelming harsh flavor that masks the rounded taste of the coffee itself. The hazelnut has a wonderful, nutty taste, while the dark roast contains enough flavor so that leisurely sipping your instant morning coffee is not only possible, but also enjoyable.

Folgers has been doing this for a long time. Established in 1850, this company has dominated the coffee market for generations. They haven’t been lost in the modern-day switch to instant, however, and have managed to make a rather enjoyable option for their customers.

Introducing the coffee crystals. These are made rather simply, actually. Folgers purchases instant coffee powder from various suppliers, liquifies it, and then dries the resulting coffee with heat to form the crystals that, when added to hot water, melt into a delicious cup of coffee. This process remains entirely separate from the trouble of finding good beans sourced ethically, but the result is surprisingly good.

Folgers stumbled through trial and error and found this the most agreeable and affordable means to drink a quick cup of joe. It is surprisingly smooth, not too overwhelmingly bitter, and incredibly affordable. 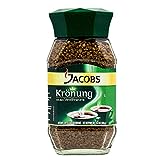 This is a well-known instant coffee brand. It sells across the world and is loved by many people. Started in Germany in 1895 by a coffee connoisseur, the company’s grasp and experience with good coffee has spanned many decades.

They have a gold instant coffee and a regular roast. The variety in flavor is always a plus, but the consistency in its taste and quality is nothing to bark at. For generations, they have been producing high-quality standards that not only meet the expectations of a great deal of the world, but the Germans as well. In short, it has the premium taste of a German-engineered product.

This instant coffee comes from an old Italian company that, like Jacob’s Kronug, has been around for many decades. They are a well-established company, meaning that a lot of the products they produce will meet the expected standards. This is a ubiquitous brand of instant coffee, and at only 4 dollars for a 12 oz. jar, it definitely seems worth it.

With espresso grade roast, this is going to taste naturally bitter. Many reported the bitterness hard to handle, while others quite enjoyed it and rated it high for its quality as an instant. Overall, this seemed an affordable, reliable option without blowing away any expectations for taste. It is definitely drinkable, but isn’t going to compare to Swift Cup or Equator Coffee.

Find the Right Instant Coffee Brew for You

Well, there you have it: ten of the best instant coffee options on the market today. The caffeine market has become incredibly saturated, meaning some of the big names have lost ground while new, innovative players have completely altered the competition. Overall, these 10 instant coffee brands are delicious options that will surprise you with how much they taste like real coffee. As our love for coffee grows, however, so will innovation in the market, so it will be interesting to see how instant coffee evolves.