Whether it’s a quick cup in the morning to get you out the door or an afternoon pick-me-up, coffee is a staple for your every day life. So why shouldn’t it be easy to grab your cup and go? K Cups are a small pod filled with enough coffee for a single serving, making it one of the easiest ways to get your caffeine fix. In this article, we’ll go over our pick for the 8 best K Cup coffee makers currently available on the market.

What are K Cups?

K Cups are an invention originally debuted in 1998 as a means to help workers get a quick cup of coffee while at the office. The company claimed that it could brew the perfect cup of coffee in under a minute by using the specially designed single serving pods. As the Keurig brand became more popular, the company switched its focus from commercial products to individual consumer products. The company worked to create single serving brewers small enough to fit on any counter space, utilizing their K Cup technology for the easiest cup of home brewed coffee.

Today, Keurig brewers and K Cups can be found in grocery stores, supermarkets, coffee shops, and various online retailer shops. There are over 200 varieties of K Cups, including brands such as Green Mountain Coffee, Dunkin’ Donuts, Starbucks, Peet’s, and Newman’s Own. Along with coffee, many K Cup manufacturers also offer K Cups with tea, hot chocolate, lemonade, ciders, and more.

When you look at the outside of a K Cup, you will see a small food-grade plastic cup covered with a tinfoil lid. These cups are extremely durable, and designed to resist heat, moisture, and light to protect the product inside. On the inside of the K Cup, there is a small paper filter attached to the plastic cup via a food-safe adhesive.

The coffee grounds are placed inside the paper filter, after going through the process of degassing (releasing carbon dioxide). Once the K Cup has been assembled, the air inside is taken out and replaced with nitrogen. This helps keep the product inside from spoiling, and keeps everything secured in the pod.

​How Do K Cups Work?

To use a K Cup, place a pod of your choice into your single serving K Cup coffee brewer. There are small needles inside of the brew chamber that will puncture the K Cup from the top and bottom, allowing the water to run through the pod. Water from the brewer heats up to around 200 degrees Fahrenheit, before being pushed through the top hole of the K Cup.

The water runs over the coffee grounds and is filtered through the paper, while the hole in the bottom allows the brewed coffee to pour out into a mug. Typically, the entire process takes under a minute, though brew times can depend on the coffee maker. Once the cup has been made, release the pod from the brew chamber and toss it out.

​What We Look for in the Best K Cup Coffee Makers

Below we have our picks for the top 8 best K Cup coffee makers, in no particular order. 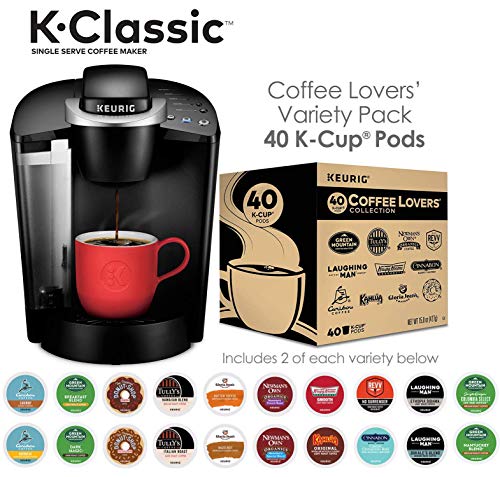 The Keurig K55 Classic K Cup Coffee Maker is the #1 Best Seller on Amazon for coffee machines, making it a shoe-in for our list. The K55 Classic comes with a brewer, removable water tank with handle, 2 water filters, and 4 sample K Cups. It has a large 48-ounce water reservoir that can brew more than 6 cups before needing to be refilled.

This brewer has three brew cup size options: 6, 8, and 10 ounces. Use the 6-ounce option for a stronger brew, or the 10-ounce option to fill up a travel mug. The K55 Classic claims that it can brew coffee in under a minute, making it one of the fastest single serve brewers available. 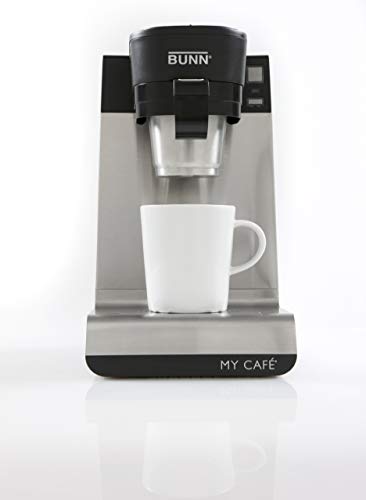 ​The BUNN MCU Single Cup Brewer is a multi-functional coffee machine that can handle four different brewing modes. The sleek BUNN MCU Single Cup Brewer comes with four drawer attachments that allow you to brew K cups, ground coffee, soft pods and tea bags, or hot water. It has a stainless steel tank located in the back, though there is no water reservoir to store water for multiple cups.

The BUNN MCU Single Cup Brewer can brew servings between 4 to 14 ounces, depending on how strong you want your brew to be. It also has a Pulse Brew option that is said to extract a richer flavor from your brew.

​The Keurig K-Mini Plus Single Serve Coffee Maker is a sleek new product from the Keurig line with all of the power of their full sized models. This brewer can fit anywhere at less than 5 inches wide, making it a perfect appliance for any personal office or dorm room. It can brew cup sizes between 6 and 12 ounces using K Cup pods, and the removable cup reservoir fits enough water for a single cup.

In the back of the K-Mini Plus, there is a pod storage compartment that can hold up to 9 K Cups. There is also a cord storage area to help keep your counter space tidy.

​Cuisinart is well known for their premium kitchen appliances, and they do not disappoint with the SS-10 Single Serve Coffee Maker. It has a large 72-ounce removable water reservoir that can make over ten small cups of coffee or tea. There are 5 brew sizes, ranging from 4 ounces to a maximum of 12 ounces.

This K Cup compatible brewer is fully programmable, so you can adjust the settings to brew your perfect cup of coffee. The blue blacklist LCD control panel allows you to set an auto on/off time, the temperature of your brew, and the brew size. There is also an option for dispensing hot water, and a rinse option for an instant clean. 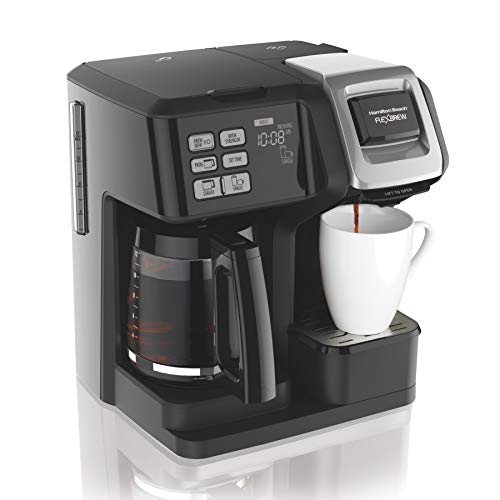 ​The simple control panel has large buttons with illustrations that make it easy to program. The Carafe and Single buttons allow you to choose which brewer you want to program. Both sides have brew size options, strength options, and auto brew functions.

The simple control panel has large buttons with illustrations that make it easy to program. The Carafe and Single buttons allow you to choose which brewer you want to program. Both sides have brew size options, strength options, and auto brew functions. 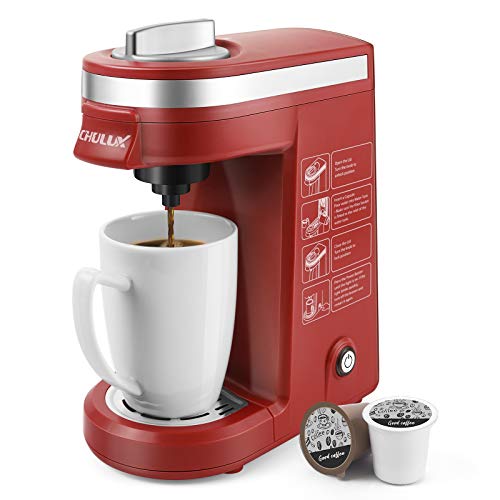 ​While many of the K Cup coffee brewers on our list have premium features, we know that many of you might just be looking for a cheap brewer that can make a good cup of coffee. The CHULUX Single Cup Travel Coffee Maker is one of the best single brewers for those on a budget or constantly on the go. Its compact size makes it easy to transport, and is perfect for any small kitchen, office, dorm room, or mobile home.

The CHULUX Single Serve Coffee Maker fits most K Cups, so you can use whatever brand you like most. The One Touch Operation makes it easy to brew a cup of coffee in 3-5 minutes. Simply insert the K Cup, fill the 12-ounce water reservoir, and press the One Touch button. Coffee from the CHULUX Single Serve Coffee Maker comes out strong and flavorful, making it a great for your morning cup. 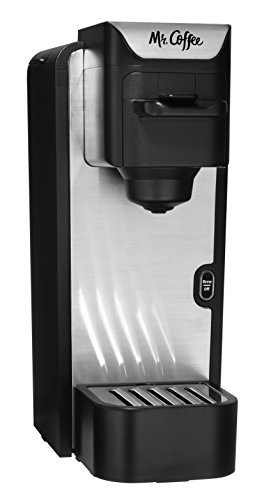 ​Mr. Coffee is a brand that has been around for a while, known for their inexpensive no-frills coffee makers. The Mr. Coffee Single Serve 9.3 Oz. Coffee Brewer is a small coffee maker that is compatible with K Cups of any size. It has a 9.3-ounce water reservoir, making it suitable for larger mugs. The drip tray is removable for easy clean up, and also allows you to make room for tall travel mugs.

There are three brewing sizes available on the Mr. Coffee Single Serve 9.3 Oz. Coffee Brewer, including 6, 8, and 10 ounce cup size options. To operate the unit, simply fill the reservoir with water and press the Brew button. The indicator lights will inform you of the brew status, including signals for Heating and Brewing.

​Our Final Thoughts on the Best K Cup Coffee Makers

​If you’re a coffee lover, you know how expensive it can be to get a single cup of coffee from a café. Even if you’re an avid coffee drinker, making a full pot of coffee can often be just too much for a single person. These struggles are the exact reason that Keurig invented the K Cup for single cup coffee brewing.

Today, there are many K Cup compatible single serve coffee makers, with a variety of features to suit just about any type of coffee drinker. Even if you’re not a fan of coffee, K Cup coffee makers have the versatility to create other warm or iced beverages like tea or lemonade. Whether you’re looking for a quick cup, or want an enhanced brewing experience, there’s definitely a K Cup coffee maker in this list that will satisfy all of your coffee needs.